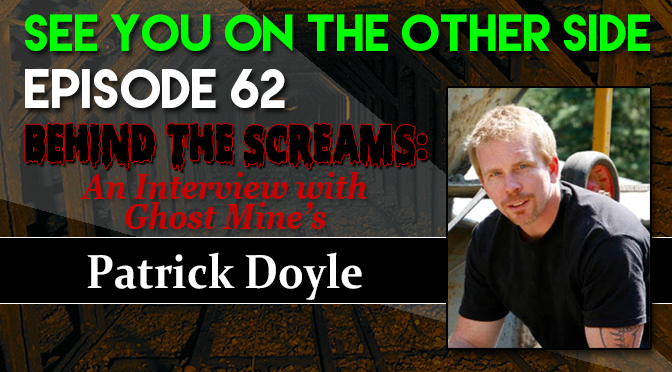 I’ve often been critical of a lot of the “paranormal reality” television out there because it amazes me how much evidence that they can collect in one place in a short amount of time. They go to a new place every week and somehow come up with amazing evidence. If you’ve ever been on a paranormal investigation, you understand that most of the time you come up empty-handed, so how do these guys come up with incredible evidence every single week?

Well, that’s why I thought the premise of Ghost Mine was pretty interesting. Instead of going to a new place every week, they were going to stay in one place for several weeks and see what happened. The idea behind the show was that an old mine with a reputation for being haunted was being reopened in Oregon by a mining team on the hunt for gold and a paranormal research team on the hunt for ghosts. It would be a pretty awesome setup for a horror film (it almost feels like it could be a sequel to one of my personal favorites, Quatermass and The Pit AKA Five Million Years to Earth).

The show ran for two seasons on the SyFy Channel (it’s still hard to type out that silly name)ad it was hosted by Patrick Doyle and Kristen Luman. On the heels of the premiere of their new show, Behind The Screams on the Reelz Network (a show that explores the real-world inspiration for horror films, something that of course we can get behind here!),  we had a great conversation with Patrick on his lifelong quest for the paranormal.

Patrick goes into detail on his first paranormal experience of seeing  a Shadow Person as a child and how that eventually turned into the hobby of investigating haunted places looking to see if he could find more (something that I admire his courage for, my own visit from a Shadow Person left me with an approach avoidance conflict about seeing one again!)

While Patrick undertook his paranormal investigations over the years privately (and most often terrifyingly (to me at least) alone, he said that he didn’t often go with a team), his transition to paranormal television personality wasn’t something that he expected.

In 2006, Patrick released a young adult book he authored and illustrated called Edgar Font’s Hunt for a House to Haunt (say it fast a couple of times, you know you want to…) To promote the book, he started looking for YouTube videos of paranormal activity that were obvious fakes and would deconstruct them in his own blog and video series called Haunted Hoax. And that’s where it started. After becoming a popular series (as well as then turning into a target for Internet haters, but since Patrick is a man that openly admires the enemy-of-spoon-benders everywhere, James ‘The Amazing’ Randi, he should know that “haters gonna hate”.

Anyway, Haunted Hoax became so successful that SyFy contacted him about hosting Ghost Mine, but when they hired him, they made him take down all of his YouTube videos, effectively “buying his brand”. And while that sounds nefarious, it isn’t really. I also do work with a website that features musician profiles and songs, and when a major label signs an artist, they demand all previous songs, pictures, and profiles are taken down, that way they ensure the representation of their new talent acquisition is controlled by them, it’s part of protecting their investment.

However, while the scrubbing of those videos did create a little controversy, Patrick unwaveringly defends the evidence that they found on Ghost Mine and indeed, says that he was disappointed that they left some of their best stuff on the cutting room floor.

But while paranormal investigators might have an insight into the other side of the veil, no one can predict what’s in the hearts of network executives and a regime change at SyFy spelled the closing of Ghost Mine.

Patrick returned to being a book author and a paranormal investigation until being called up by the Reelz network to work with Kristen once again on Behind The Screams, and we finish up the interview with advice for amateur investigators.

Number one, he says, “Do it for yourself. Do it for your own experience.” And that you really only need three items when you go out:

This episode’s song has as a little bit of a Old West theme to go along with Ghost Mine. It’s a Sunspot track called “Ghost Town”.

This place was never meant for human habitation
and it’s just a ruin, well it’s just a ruin now.
And I can see the cracks in the foundation,
there’s a hole in the door from the fights waged here before.

Let’s not get caught with our pants down,
I won’t get busted with my fingers in the cookie jar again.
This old bed is a hand-me down,
But if you wanna crash here I’m game if you are.

This old place is a ghost town.
This is the room where we store,
all the things we like to forget.
Welcome to my hellhole,
a place for the lost souls,
of all the hearts left here for dead.

Don’t get any closer,
don’t make any sudden moves.
Don’t look at me like that,
I ain’t no scaredy cat.
This is a house of spirits,
this town of full of ghosts,
so upright so convincingly
they don’t have to be dead, but they’re dead to me.

See the wanted sign,
that’s my face.
I’m not welcome anymore,
as if I ever was.
They plastered my name,
all over this place.
We might have to leave running,
so keep your eye on the door.

This old place is a ghost town.
This is the room where we store,
all the things we like to forget.
Welcome to my hellhole,
a place for the lost souls,
of all the hearts left here for dead.

One thought on “62 – Behind The Screams: An Interview with Ghost Mine’s Patrick Doyle”