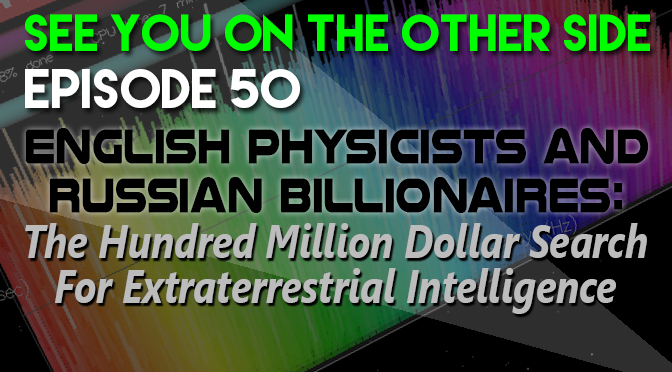 The conversation begins with a discussion of the “Milwaukee Lion”, the mysterious wild animal that people have been seeing in the Milwaukee area. Some say it’s a mountain lion that someone kept as an exotic pet and then escaped, but Mike and Wendy don’t quite believe it (even though Allison from Milwaukee Ghosts said that the lion had been spotted only a mile away from her house on Sunday night the 26th.)

But the main discussion comes from the $100 million grant that Russian billionaire, Yuri Milner, has dedicated to the search for extraterrestrial intelligence and how he’s being joined by the everyone’s favorite English physicist with a robot voice, Stephen Hawking.

In the past, Hawking has warned that when we finally make contact with alien life, it might be like when Columbus came to the New World and you know how well that turned out for the Native Americans (this quote was featured in the awesome trailer for the film Skyline, which only set us up for a gigantic disappointment when we actually saw the movie and discovered that they forgot to write a script.)

But the search for life on other planets has been ongoing for several decades now with the SETI Institute whose history begins in 1960 when a pair of scientists put forth the idea that we should be combing the skies not just for visual proof of alien intelligence, but we should use radio telescopes to see what we can hear!

We discuss the Drake Equation, the Fermi Paradox, and more as we go into the history of SETI, it’s relationship to NASA and the University of California – Berkeley, how we all used to have Seti@Home on our computers back in college because we all wanted to be the ones who finally found aliens (and how you can install it right now and be the first one!) And then the conversation finished up where Mike talks about his visit to the Arecibo radio telescope in Puerto Rico (where most of the radio signals that SETI investigates are collected (and where Mulder had his own close encounter in the Season 3 X-Files opener) as well as his Search for Extraterrestrial Life class at the Lawrence Hall of Science in Berkeley when he was was just a wee nerd.

They say money gives you peace of mind,
but money don’t make you satisfied.
I guess it all depends on what you wanna do,
I only want enough to say F U.

and own my own jet pack,
have a blonde with a fake rack,
do more drugs than Kerouac,
and buy a sports team.

use a Van Gogh as TP,
have a personal chimpanzee,
buy everything on QVC,
and live on ice cream.

and drive around a red corvette,
buy up all the art in the Met,
have a Liger as a pet,
and sleep in all day.

break the law just to get off,
hang around with Hasselhoff,
get the birthmark off Gorbachev,
and eat all buffets.

They say money gives you peace of mind,
but money don’t make you satisfied.
I guess it all depends on what you wanna do,
I only want enough to say F U.

When I am king on my island made of cheese,
I’ll buy all respect and make everyone say pretty please,
I’ll trademark comedy and sell jokes for a penny,
I’ll be the banker of loyalty,
Copyright happiness and when you smile,
You’ll have to pay a royalty to me.

They say money gives you peace of mind, (I want more)
but money don’t make you satisfied. (I want more)
I guess it all depends on what you wanna do,
I only want enough to say F U.