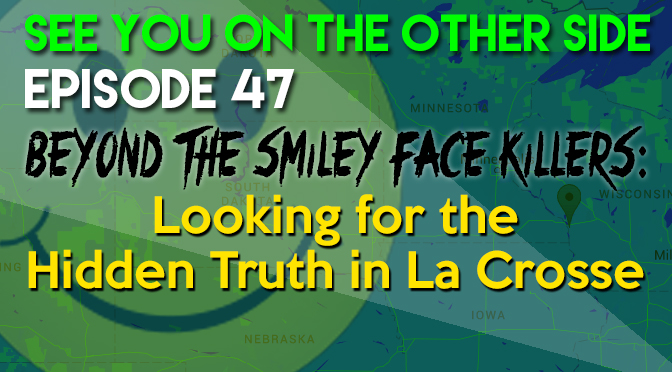 Since 1997, nine college-age men have drowned in the Mississippi River by La Crosse, Wisconsin. Authorities have consistently said that it’s a result of the men getting too drunk, wandering into the river accidentally, and not being able to get out (or maybe going for a swim and it’s a “death by misadventure”.)

It’s a case that’s close to our hearts because Sunspot has often played in La Crosse and Mike used to work at a television station there in the early part of the century during which some of these deaths occurred.

After Mike and Wendy talk about their new 5-star review, they go into the history of the “smiley face killers” theory.

In 2008, two retired NYPD detectives, Frank Gannon and Anthony Duarte, came up with a controversial theory. They said that a group of serial killers was roaming the Interstate Highways along the Mississippi River and was killing young men all over the country and throwing them in the river to hide their crimes. The detectives claimed that was a pattern of “smiley faces” at each of the scenes where the victims went into the river.

Here’s a documentary about it:

But Neil Sanders, a retired deputy Medical Examiner from La Crosse, just didn’t believe that the “smiley face killers” theory added up and wanted to see if there might be something more to it than serial killers or drunken accidents. He wanted to look into a supernatural explanation. That’s when he contacted Jay Bachochin of Wisconsin Paranormal Investigations and that formed the basis of the documentary film, directed by Scott Markus, The Hidden Truth?.

Mike and Wendy are then joined by Allison Jornlin from Milwaukee Ghosts and they proceed to interview Sanders, Bachochin, and Markus about the movie and some of their theories.

There was a steam boat that sank in La Crosse in 1870, the War Eagle, where 5 people died, including a young woman named Mary Ulrich. One of the theories that they pose in the film is that the recent drowning victims might have been “more open to spiritual channels” while inebriated and heard Mary or another ghosts’ voice and jumped in the water to try and save them.

Another part of the movie has Neil talking to a Ho Chunk elder about the “water spirits” of some Native American legends, supernatural entities that live in river and lakes. This is similar to the Slavic vodyanoy or the Welsh kelpie, and that creature was known over here as “the water man”. Allison proceeds to talk about some research that she’s discovered in a 1930s collection of American folklore about water spirits and how the water man might try to “take your soul”!

Jay and Scott talk about their interest in the paranormal and their search for the truth above anything else and how it influenced their decision to document the paranormal investigation into a film. Scott discusses the weird things that happened to some of their equipment while conducting the investigation over the site of the War Eagle sinking and Jay goes into some detail about an interesting EVP that they capture as well.

Paranormal vs. a serial killer vs. accidental drowning – there’s no smoking gun and conclusive evidence in any of the directions. But the conversation wraps up discussing how The Hidden Truth? respects the victims and gives us another theory to entertain as to their true fate.

If you’re interested in purchasing The Hidden Truth?, you can order a DVD copy right here.

6 thoughts on “47 – Beyond The Smiley Face Killers: Looking for the Hidden Truth in La Crosse”