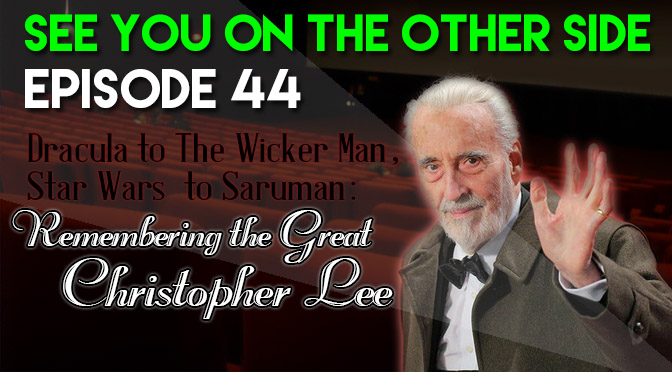 With hundreds of film credits, horror icon Christopher Lee is listed in the Guinness a Book of World Records as the most prolific actor in cinema history. With his passing last week at the ripe old age of 93 years old, it was the final act for an artist for whom retirement was never even an option. Most famous for his work as Dracula in the Hammer Horror films, Lee would go on to appear in the most successful movie franchises in history. He was James Bond villain Scaramanga in The Man With The Golden Gun, The unfortunately named Count Dooku (AKA the badass Darth Tyranus) in the Star Wars prequels, the traitorous Saruman in The Lord of the Rings and the good Saruman in The Hobbit, he was even in The Young Indiana Jones Chronicles on TV (in that interesting experiment in how patient viewers would be watching a history lesson disguised as an Indiana Jones story with no action.) Christopher Lee found his villainous way into just about everything.

Allison from Milwaukee Ghosts joins Mike and Wendy as they discuss Christopher Lee’s fascinating life and career. They start by dissecting his most famous roles in the Hammer horror films and friendship with fellow Star Wars alum (and movie Doctor Who) Peter Cushing. But the discussion quickly veers to Lee’s Old World upbringing, his real life badassery serving in the special forces in World War II (he told Peter Jackson, his LoTR director, exactly how a person really sounds when they’re stabbed in the back), how he witnessed France’s final execution by guillotine, and even his late period heavy metal career. Lee’s symphonic metal albums were all about the first Holy Roman Emperor, Charlemagne, and Lee himself in true Old World fashion said that h can trace his own lineage back to the Frankish king.)

The longest discussion though is saved for a role that Lee considered his greatest and that is of Lord Summerisle in the 1973 (very distinctly) British pagan thriller, The Wicker Man, a role that he helped create by getting together with the screenwriter, Anthony Schaffer, and director, Robin Hardy, to try and blend their talents to create something truly memorable. And they succeeded, Mike tells of when he first watched the film with his Dad when he was a child and his mother comically disapproved of all the pagan nudity of the film. When Mike selected it for rental (back when we all used to rent VHS tapes from a grocery store), he merely thought that it looked cool because it featured Edward Woodward from The Equalizer and they had no idea what they were in store for.

(WARNING – SPOILERS FOR A 42 YEAR OLD MOVIE) A perfect “Age of Aquarius”-era ode to how Paganism is connected to the natural world of the flesh (sexuality)and the land (agriculture), while it contrasts Christianity as focusing on self-deprivation and the world to come. And The Equalizer could have saved himself from a Burning a Man-style sacrifice by just succumbing to his natural urges with Willow (the deliriously sexy 70s Britt Ekland.) Either way, it’s definitely not the feel good movie of the year and in the end, the good guys don’t win (or do they?) Everybody talks about the 2006 Nicolas Cage-starring, Neil LaBute-directed remake, which turns Pagan vs. Christian into a Battle of the Sexes and is an (unintentional, maybe?) laugh riot in its own right.

The discussion ends with a warning from Christopher Lee to not mess with the occult, because you’ll not only lose your mind, “you lose your soul.” This week’s song is a special one too, because it features Wendy singing Paul Giovanni’s “Willow’s Song” (NSFW), which is easily the most famous track from The a Wicker Man (probably because in the movie, it’s four minutes of nude singing, kind of like the video for “Blurred Lines” but much less douche-y.)

“Willow’s Song” from The Wicker Man, as performed by Sunspot.

Heigh ho! Who is there?
No one but me, my dear.
Please come say, how do?
The things I’ll give to you.

A stroke as gentle as a feather
I’ll catch a rainbow from the sky
and tie the ends together.

Heigh ho! I am here.
Am I not young and fair?
Please come say, how do?
The things I’ll show to you.

Would you have a wond’rous sight?
The midday sun at midnight.

Fair maid, white and red,
Comb you smooth and stroke your head.

How a maid can milk a bull!
Mmmmm-mmmm And every stroke a bucketful.

4 thoughts on “44 – Dracula to The Wicker Man, Star Wars to Saruman: Remembering the Great Christopher Lee”