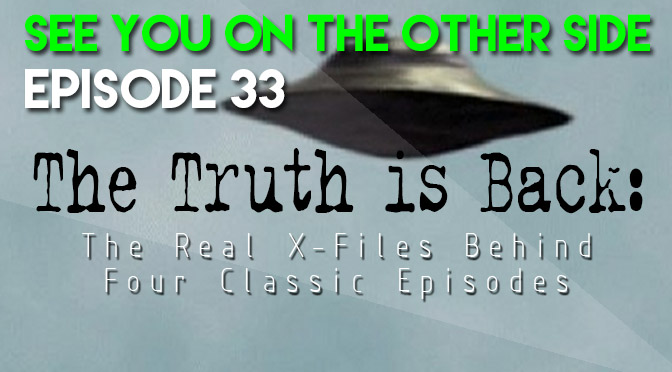 The X-Files was the breakout science fiction phenomenon of the 1990s. No other program captured the zeitgest of conspiracy theories, big government paranoia, alien abduction mythology, Gen X individualism, and post-80s seriousness as well as creator Chris Carter’s show, that on paper, probably looked like a ridiculous blend of The Silence of the Lambs and Kolchak: The Night Stalker.

So when FOX announced at the end of March that The X-Files was returning to television 22 years after it debuted, it was big news.

As two people who experienced The X-Files the first time around, Mike and Wendy talk about their experiences with the show (Mike was a true believer, hosted X-Files parties, and even read the comics.) We go into detail about Mike’s love of the show. Here’s a picture of Mike and his wife at a costume wedding in 2013 – note, Mike’s X-Files Division badge is something that he bought at Gen Con in 1996 (when he played The X-Files Collectible Card Game with Langly and Frohike of The Lone Gunmen!)

And to celebrate the return of the show, Mike and Wendy picked 4 real X-Files that inspired the paranormal stories.

They first talk about the episode, “Field Trip”, which is based on the idea of hallucinogenic fungus and shared hallucinations and Mulder and Scully get trapped in a giant cave with a fungus that’s slowly killing them while indulging them in fantasy . Mike and Wendy discuss the episode and a little bit about how madness can be passed from one person to the next.

Next up is stigmata, which is where someone exhibits the wounds of Jesus (perfect for an episode on Easter Weekend!), the real X-File behind the episode “Revelations” is based on reports from all the way back to the 13th Century with the famous St. Francis of Assisi being the first recorded stigmatic.

The alien/human hybrid is a theme that runs through the real X-File of the alien abduction narrative. Female abductees have claimed that they’ve been impregnated by aliens, run through an accelerated gestation process, and then the baby is taken from them. They remember this trauma through hypnosis and The X-Files used the idea of an alien/human hybrid in the form of a child chess prodigy, Gibson Praise, who was wanted by the US Government as well as the alien invasion force.

Finally, Mike and Wendy talk about the strange history of sin eaters, a tradition from the end of the Enlightenment, where families would pay someone to “eat the sins” of a loved one who had passed, so that the sins would transfer to the eater and the loved one would be free of sin to enter Heaven. The X-Files episode, “The Gift”, deals with a sin eater who can eat the diseases from sick people and take them unto himself.

Then they finish up with a song inspired by the news of the return of The X-Files, a comical warning to Chris Carter and FOX – “Don’t Mess This Up”.

Official FOX announcement about the return  of The X-Files

The X-Files, “The Gift” (Watch on Daily Motion)
“The Weird But True History of Sin-Eaters”, io9

Song: Don’t Mess This Up by Sunspot

No matter how you scream and cry.

3 thoughts on “33 – The Truth Is Back: The Real X-Files Behind Four Classic Episodes”