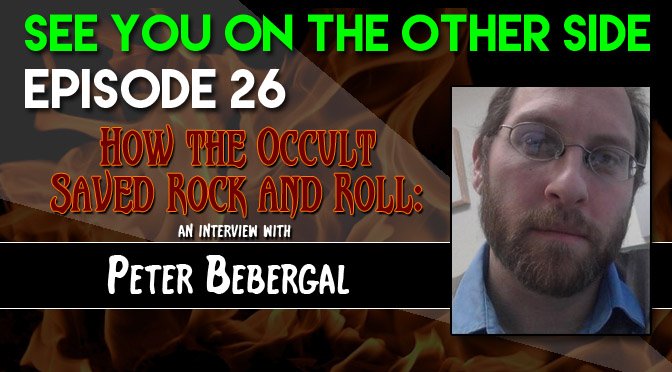 Today we interview Peter Bebergal, author of the book. Season of the Witch: How The Occult Saved Rock n’ Roll, which is a fascinating look into how the occult slipped into the mainstream through the music of the Baby Boom generation. Rock n’ roll created the perfect storm of the Beatniks interest in Eastern mysticism, the Animism roots of slave spirituals and Gospel music, and the Hippie embrace of the Age of Aquarius.

Mike and Peter first discuss their mutual love of Dungeons & Dragons and then move on to an interview that Wendy describes as “like a vortex of weird geeky intelligence”. They get into how Robert Johnson actually was not the blues artist who had sold his soul to the Devil and how mystical and magic themes spread through the music of the 60s’ counterculture. Then The Great Beast Aleister Crowley rears his ugly head, David Bowie’s cocaine-fueled fascination the weird enters the conversation, they discuss Peter’s favorite modern acts that use occult symbolism (it’s not just Mötley Crüe anymore!), and a whole lot more as they get into the nuts and bolts (or should we say, eyes of newts and toes of frogs instead!) of Peter Bebergal’s incredibly well-researched and thought-provoking book.

Season of the Witch Links:

Season of the Witch: How The Occult Saved Rock n’ Roll on Amazon

Guys like me,
Want Devil Music,
From underneath,
We love Devil Music.
Heaven don’t want me in their state of grace,
and Hell’s afraid I’d take over the place,
so let’s raise up the horns to Devil Music!

I dream of thousands just like you,
Turning their backs on you know who,
and living life for today,
instead of waiting to die, just waiting to die.
Cuz paradise is a place we can find right here,
with electric guitars, condoms, drugs, and beer,
Existing in the now,
instead of watching life go by, life go by.

Guys like me,
Want Devil Music,
From underneath,
We love Devil Music.
Heaven don’t want me in their state of grace,
and Hell’s afraid I’d take over the place,
so let’s raise up the horns to Devil Music!

2 thoughts on “26 – How The Occult Saved Rock & Roll: An Interview with Peter Bebergal”