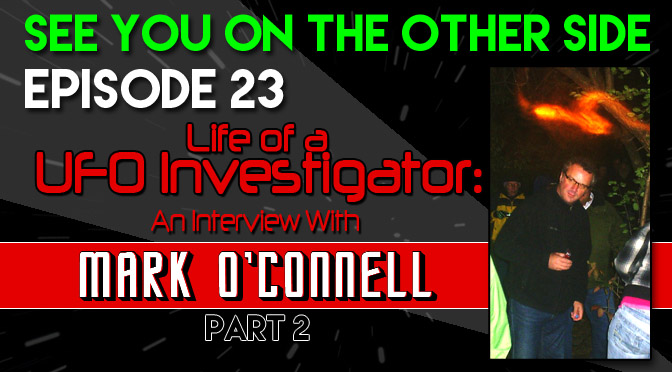 Here’s the second part of our interview with screenwriter and UFO investigator, Mark O’Connell. He and Mike talk about how Mark got into checking out reports of UFOs as an official MUFON (Mutual UFO Network) Field Investigator. He talks about the process of becoming a UFO Investigator as well as the cases that he’s investigated that struck him personally as the most unexplainable.

Mark also bursts the bubble on the recent hype surrounding the “declassification” of 100,000 Project: Blue Book (the Air Force’s investigation into UFOs through the 1950s to the 1970s) documents that were published on the Internet in the past two weeks as part of a massive amateur journalism project by John Greenewald and heralded all over mainstream news sources like the BBC and CNN. He says that while it’s great that it’s being covered in the news, there’s nothing new in the files that hasn’t already been analyzed and seen already.

Mike and Mark then talk more about Project: Blue Book and its director, J. Allen Hynek. Mark is currently working on a biography of the astronomer who was the face of official UFO investigation the Twentieth Century. Hyena developed the Encounters scale used by Steven Spielberg in Close Encounters of the Third Kind and served as a consultant on the film. They talk about the famous Michigan “swamp gas” case that helped discredit Hynek in the eyes of UFO enthusiasts as well as getting the attention of Michigan congressman and future President of the United States, Gerald Ford. Mark goes into why Hynek’s critics are wrong and clears up some myths surrounding the event.

Overall, this episode is for anyone who’s interested in how serious investigation into unexplained events is done and for people who are fascinated with how UFO phenomena became an American pastime. Mark is a wonderful storyteller and a fount of knowledge, and we can’t wait to have him back on the show!

Huffington Post, UFOs Over Michigan Baffle Multiple Eyewitnesses: Could It Be Swamp Gas?

When you crashed into my desert,
I was wasted and afraid,
and everything you did was my favorite,
every moment a holiday,
When my jokes were still hilarious,
Your mood was still gregarious,

Take the moments you remember,
and the places that you treasure,
and cross the rivers under all the bridges that we burned.
There’s no drug to recreate,
things past their expiration date.
And I hope there’s more to live than just waiting for our turn.

Just like the German scientists after the war,
rebuilt all the spaceships that came crashing through our door,
These chemical machines and their adolescent dreams,
are much more than slaves to their biologic needs.

And all the singers that will say,
that love just fades away,
They don’t have to live inside,
our lives every day.

2 thoughts on “23 – Life of a UFO Investigator: Interview with Mark O’Connell – Part 2”